I have a number of Linux system, including several virtual machines with various distributions running everything from test web servers to a Minecraft server for my daughter, and a Raspberry Pi that gets its SD card swapped out all the time depending on what I need it to do. While most of these systems can be automatically updated via yum or apt-get to install new versions of packages, a few are running distributions for which update packages are not readily available.

This doesn’t mean that I can’t secure them against the recently discovered Shellshock vulnerability. I just needed to compile the bash software from the source code, including the Shellshock patches, and install it. That is actually not nearly as complicated as it might sound. Here’s how to do it:

In the first installment of this series, I talked about visual enhancement mods that make the world of Skyrim come to life. This time around, I want to talk about how we interact with that game world. The Skyrim UI is obviously adequate for playing the game, but there is definitely room for improvement.

As I mentioned in the previous article, many of the mods I use require SKSE to allow for extended scripting. I included a brief discussion on the installation of SKSE in part 1, and you are going to need it for most of the mods in this section, so if you haven’t done so, go install it!

First and foremost, the SkyUI mod is an absolute must for any modded Skyrim. While the changes SkyUI makes directly to the interface are subtle (mostly tightening up wasted space) it has a few really nice improvements as well. The inventory, trade, and magic windows have all been cleaned up, with graphical icons for categories and the ability to search via text string. The trade menu contains a tabbed interface to switch between your items and the vendor’s item list. 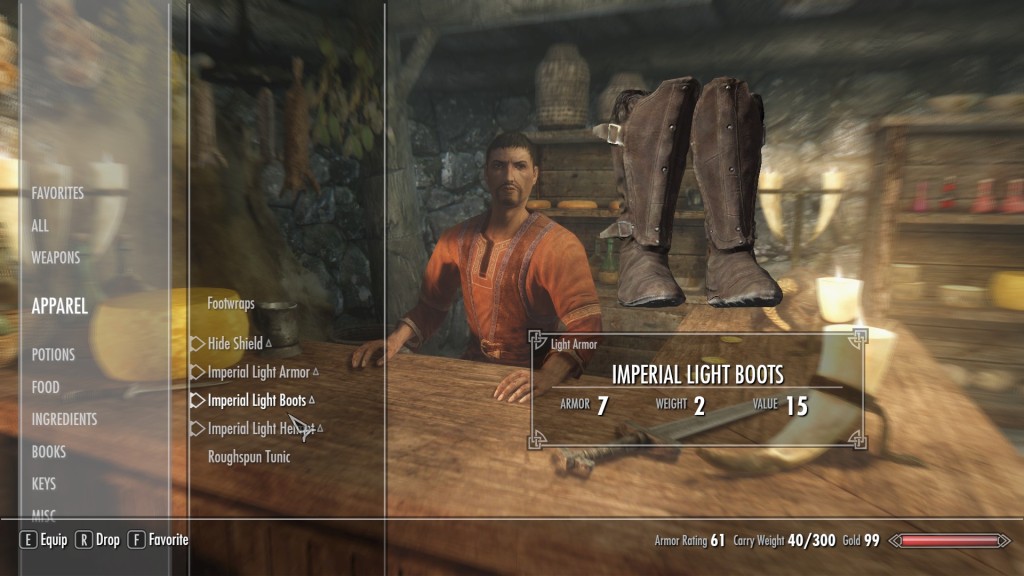 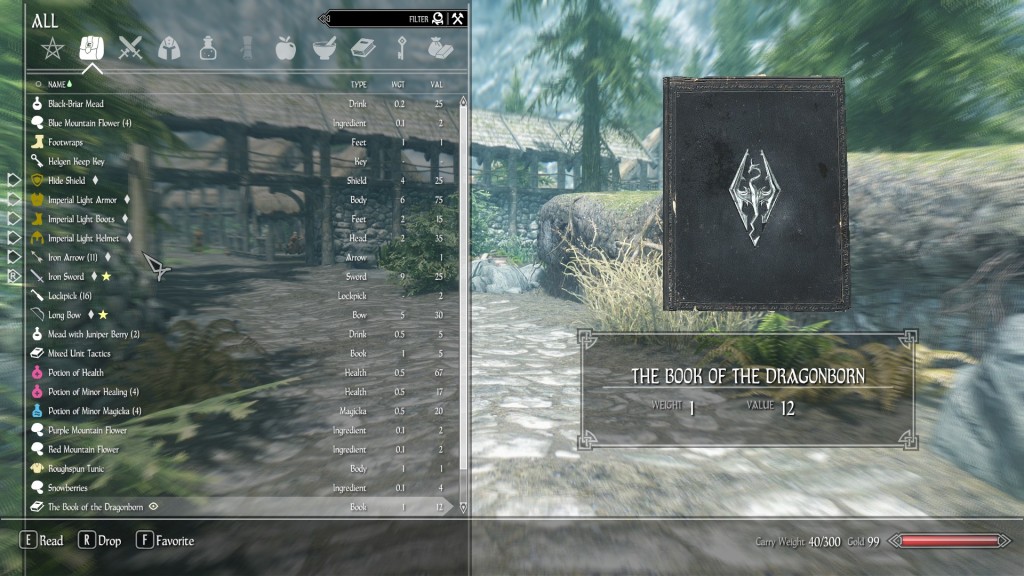 The SkyUI inventory screen, with category icons, details at a glance, and a search bar at the top.

Finally, and perhaps most importantly, SkyUI adds a Mod Configuration Menu (MCM) to the “Escape” menu in Skyrim’s UI. Other mods can register with the MCM to allow their configuration options to be integrated into a consistent interface.

There are a couple of annoying issues with Skyrim’s interface, and both Better Dialogue Controls and Better MessageBox Controls address some of the most common. These mods change the way you interact with, as you might expect, NPC Dialog and the pop-up menu boxes that occasionally appear on-screen.

In the case of Better Dialogue Controls, sorts out a conflict between the mouse and the keyboard. If you happen to have the mouse pointer over a portion of the dialog menu, it can interfere with using the keyboard to navigate the dialog entries, leading to selecting dialog options you may not have intended.

Better MessageBox Controls lets you use the keyboard (WASD) keys and Activate (E) to navigate pop-up menus, similar to the way you would using a gamepad. It also makes a few changes to the buttons themselves (bigger “hit-box”, hilighting)

Making it All Go Away

One of my favorite UI mods is called Immersive Hud (iHud), which hides every UI component when you don’t need them to be shown. When any of your stat bars (health, magicka, or stamina) are full, they fade out. If you aren’t sneaking or using your weapon, the crosshairs fade away. The compass at the top of the screen is hidden unless you press a key to see it.

The result is that, most of the time, you have no interface chrome visible on the screen and can just enjoy the Skyrim landscape in its full glory.

My selection of interface mods is fairly light, simply because there are not a lot of other changes that I find necessary for the interface. In the next installment of the series, I’ll look at the NPC, PC, and Creature mods I use in Skyrim.

I don’t know exactly what sequence of updates caused the proliferation of the 80246002 errors when attempting to run Windows Updates, but it appears to be a fairly wide-spread problem on Windows 7 machines.

The problem manifests itself as an inability to manually search for Windows Updates. If you are on a domain that uses a Software Update Server, this check is done by selecting the “Check Online for Updates from Microsoft Update” link at the bottom of the Windows Updates window. Typically the manual check will quickly fail with the error code 80246002.

Searching the net for a solution comes up with a few suggestions, most commonly to change your DNS server to 8.8.8.8 (Google’s DNS) and try again. This does seem work to allow for updates to be downloaded immediately, but it doesn’t solve the problem going forward (you will have to do it again the next time you want to check for updates), and you can’t access any of your local domain resources until you switch it back.

A co-worker and I discussed this problem yesterday, and she worked out a procedure that has corrected the problem on all of the PCs we have tried it on so far:

After that, manually checking for updates seems to work normally on the machines we have tested. It seems that reverting back to Windows Update and then opting back in to Microsoft Update repairs the problem with the update client on the PC.