I’ve created an initial page to hold a repository of Roll20 PowerCards macros, in the hopes of collecting and sharing the best ones created by myself and the community. the new page if available from the top navigation here : http://www.twentysidedblog.com/roll20-powercards-library/

Initially I’ve only got a couple of macros that I use form some of my players in-game for D&D 5E (I rely on PCMHelper for almost everything), but This will be updated to include new macros and hopefully new games over time.

So it has been quite a while since my last post to the blog… What can I say, life’s been busy 🙂 I figured it was time for a small update, especially since I hope to start posting on a more regular basis.

Anyway, you’ve probably noticed (your browser probably insists that you notice) that the site doesn’t support SSL… My web host makes it difficult to implement Let’s Encrypt, and since I don’t actually earn any money from the blog I can’t see paying another $60+ per year for it for SSL, especially given that I don’t sell anything on the site.

In other news, the latest version of the D&D 5E character sheet in my resource section has seen more than 12,000 downloads. That’s pretty crazy, and it is kinda cool that people are using the sheet. Heck, the 2E sheet has been downloaded almost 2000 times.

I’ve updated my World of Warcraft Add-On (QuestClicks) for the latest version of the WoW Client. I haven’t jumped into classic yet, but I might do so just to make whatever tweaks are needed for it to work. If you aren’t familiar, QuestClicks creates a bar of clickable items for things like quest starters, items you have to use during quests, and openable containers you get from emissaries, and other sources.

Finally, I have a couple of projects in the works, including a D&D (or maybe DCC – I haven’t decided yet) campaign setting that I’m looking into perhaps putting up on Kickstarter. It is a setting my own players have played in, an has been kicking around for the better part of two decades now.

Watch this space for more info on that as well as other topics – coming “soon”.

So I ran across a Roll20 API script called PowerCards, which lets you create nicely formatted output cards for abilities and attacks. Stuff like this: 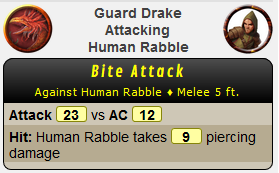 I really like this kind of thing, as it add some flare to the game beyond the fairly simply built-in die rolls.

I wanted to add a few features to the script, and the author had long since stopped supporting and updating it, so I contacted him about taking it over. He was agreeable, and I’ve released two updates to the script so far (You can find the current thread at https://app.roll20.net/forum/post/6264588/script-powercards-3-thread-5). A couple of the changes involve a system that lets you specify video and audio effects based on character attributes instead of baking them into your PowerCard macros. That way you can use generic macros and still have customized effects.

This system is hard to describe in text, though, and one of the users in the tread above was looking for a better way to understand it.

So, armed with nothing except my headset and some free software I found online, I started up a youtube channel and recorded a demo. I don’t have a professional mike, and I’ve never done any video recording before, but I think it came out well enough to do the job. You can find my new channel here : https://www.youtube.com/channel/UC4-KDSu0CE_DRasvXqVKA9g

and the video itself (right now, it’s the only thing on the channel!) is here : https://www.youtube.com/watch?v=JwUkdO-F3LQ&t=134s

After a (very) short stint with Deadlands, my group decided to go retro and start up a new AD&D 2nd Edition campaign. Of all of the revisions to D&D, 2E is probably my favorite. Sure, it is a little wonky as far as the details are concerned, but everyone in the group is familiar with it. Having just about every supplement ever made for it helps too 🙂

I went digging through some of my old files and located a text file I had created in a DOS text editor about 25 years ago with what I considered to be a nice character sheet for 2E. I used the old DOS line-drawing characters (we didn’t have fancy things like multiple fonts back then!) At some point I had updated it to include the Skills & Powers attributes, though it still works equally well without S&P (which we aren’t using). 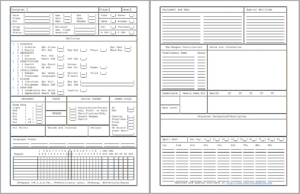 I opened the file in Word 2016 and it happily converted it and kept the whole layout. I made a few minor changes to fill the page width and saved it out as a PDF so I could use it for our new game. Also, if I upload it here, I’ll be able to find it again later! 🙂 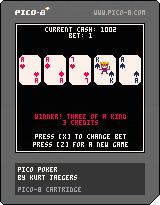 While working on my Pico-8 RPG, I decided that it would be nice to put together a simple game to work out any issues with the PICO-8 Framework I’ve been working on. To this end, I put together PICO Poker, a simple video poker game (with self drawn terrible art!)

The framework is based on XNA’s game component system, and allows you to compartmentalize your code to focus it on a specific task instead of tracking game states across a huge chunk of code. I’ve included the P8Coder source file (a nice little utility for working on large projects).

No sound, because I’m awful with the sound editor.

Consider the code (and the graphics) as CC0. Utilize them in your own projects however you wish. If you want to mention me or link back to the blog, great. If not, that’s fine too!

(NOTE: The game itself has been moved inside a “Read More” to keep it from beeping every time the page loads)

With the release of Fallout 4 just a couple of months away, lots of people (myself included) are playing through the previous games in the franchise in anticipation. Fallout:New Vegas is a great game all on its own, but the beauty of gaming on the PC is that we don’t have to settle for games the way they were released. Mods can enhance, and sometimes completely transform, the gaming experience.

To that end, I have put together a short guide to modding Fallout: New Vegas using Mod Organizer with a number of visual improvements, extended content, and other goodies.

In the guide below, I cover most (if not all) of the installation systems you are likely to run into while using Mod Organizer. The program does a pretty good job of covering all of the types of mod packaging out there, and I use it for all of the Bethesda games I play.

I picked up the Numenera core rulebook a short while back. For those not familiar with Numenera, this is a new pen-and-paper role-playing game from Monte Cook, the long time TSR author, and producer of various D&D publications, including several items from the Planescape setting, and founder of Malhavoc Press, a producer of D20 supplements. 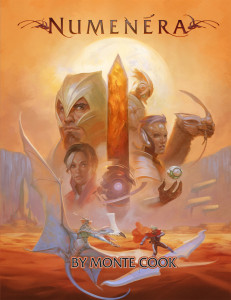 Numenera was funded on Kickstarter, raising over $500,000. Unfortunately, by the time I found out about it the Kickstarter campaign had ended, so I picked up my copy on Amazon.

The setting is described as “Science Fantasy”, and takes place on Earth about 1,000,000,000 (yes, one billion) years in the future. Over this vast stretch of time, our world is now unrecognizable. Several civilizations have arisen, thrived, and fallen over the course of this time, with the game detailing the setting of the Ninth World, built upon the rubble and ashes of the eight great civilizations that came before it.