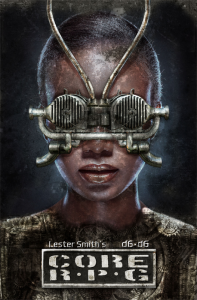 I was browsing through the Kickstarter games section last night and stumbled across an interesting little project by Lester Smith. If you aren’t familiar with Mr. Smith, he was the co-author of the Planes of Chaos boxed set for TSR’s Planescape setting, and the editor of Gary Gygax’s Dangerous Journeys RPG (and the supporting magazine) – Gygax’s creation after leaving TSR. Mr. Smith has also been involved in Traveller, Sovereign Stone, Deadlands, and a number of other RPG-related projects.

Currently, he is the president of Popcorn Press, producing eBooks and card games. His latest project is a new lite-on-rules RPG called d6xd6 CORE, which is currently in the middle of its Kickstarter campaign.

The character sheet for the CORE RPG fits on a single business card (and in fact, backers of the project at the $9 level and above are receiving a sample as one of the completed stretch goals, and more can be printed on business card paper or ordered as Kickstarter addons). The game adopts a single stat : Focus. The more diversified a character’s skills are, the lower his Focus. The lower a character’s Focus, the harder it is for him to be particularly good at any single thing.

The really interesting thing about the project is that the CORE RPG rules are meant to be easily incorporated into pretty much any setting, and Mr. Smith has worked with a number of authors of popular fiction novels and series to incorporate their settings into the CORE RPG book that will result from the Kickstarter campaign.

As of this  writing, eight settings have been “unlocked” via stretch goals, including the Watershed setting by Douglas Niles (really good books if you  haven’t read them, by the way!) The funding is approaching the unlock point for four more settings, these all being Sci-Fi themed (though all pretty varied under that heading).

Beyond that,  an additional 12 settings are lined up as stretch goals at higher levels, including a 4-setting Horror pack, an urban fantasy pack, and a “laugh pack” consisting of four humorous settings. Additional “secret” packs are also in the works beyond the currently defined stretch goals.

I’m in for the print version 🙂 Hop on over to the Kickstarter campaign and help unlock the additional settings so I can have ’em!