One of the coolest things about the Kickstarter trend is that is has given us a resurgence of the “old-school” cRPG. Pillers of Eternity, Wasteland 2, Shadowrun, Torment: Tides of Numenera – just a few years ago, games like these had all but disappeared. It seems like every new (non-indie) game was a derivative of a first-person shooter (not that there aren’t some really good games in this style).

Divinity: Original Sin is a new party-based cRPG that was funded with Kickstarter, and saw it’s official release on Monday (June 30th, 2014). I had missed the Kickstarter campaign, so the official release was my first chance to get into and play the game.

So far, I’m pleased to say, that while the game is not without issues, I am very much enjoying it.

Anyone used to the toned-down, hold-your-hand style that many modern RPGs have adopted will be in for a shock playing Original Sin. If you played the original Wasteland, you might remember that the game was completely open. You could wander anywhere you wanted to right after leaving the Ranger Center. Even if that meant walking your level 1 characters into a group of enemies that could grind the entire party to dust without noticing you were there.

Original Sin adopts the same kind of freedom. When attempting to leave the city during the beginning of the game, the guards might suggest that you appear to be unfit to survive in the wilds, but they won’t actually stop you.

While you can use the environment to your advantage (more on that in a moment), your enemies will do the same, inflicting all manner of painful debilitating effects on your party. All of this, though, is a good thing. You can tone down the combat difficulty (slightly) by going into easy mode – which is still no cake walk – but making strategic use of your abilities is a must if you wish to survive for long.

An Environment that Matters 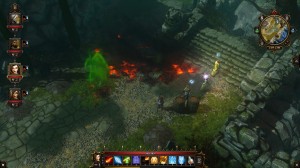 Setting things on fire with a fireball – and a poison cloud triggered by killing a zombie.

Lots of objects in the game  world can be manipulated. Barrels and boxes can be moved to clear paths and block off noxious vents. Paintings can be stolen  off the walls of houses, and items in the world will react to damage by shattering, burning, exploding, and what have you.

This is a nice change from the totally static world-as-backdrop we see in many games these days, but Original Sin goes a step beyond these interactions. Surfaces in the game can be covered with various effects – fire, water, ice, poison, etc. These surfaces will not only convey effects for characters (player and non-player) standing in them, but will also react realistically with other elements.

For example, a rain storm can put out fires and make areas (and creatures) wet. You have options for following that up. Use a cold-based spell on a wet monster and you have a chance to freeze them, denying them actions until they thaw out. Or, you could shoot a fireball into the puddle, creating a scalding cloud of steam. You might also fire a lightning bolt into it, zapping everyone standing in the water.

Using the environment to your advantage is critical to surviving combat – and it cal also be fun to pick up an enemy with your teleportation spell and drop them into a lava pool – unless they are healed by fire.

Much like the Elder Scrolls games, the classes that exist in Original Sin are just templates of pre-selected skills. You can use them as a starting point, or throw them out completely and make your own choices for the character(s) you create (if you are playing in single player mode, you create two heroes).

Advancement works the same way. Put your points wherever you feel they will be most useful. My current party consists of a wizard and a rogue-turned-ranger. I’ve picked up two companions – another wizard (more healing focused) and a warrior. I hadn’t planned on creating a ranger at all, but when I ran across a mighty fine bow I dropped a point into Bows and never looked back at one-handed weapons again. 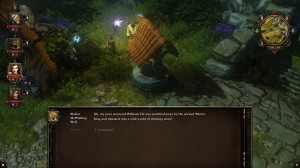 A sentient wishing well. That wants you to rescue his kidnapped brother…

Larian has certainly not forgotten that we are playing a game here, and they have sprinkled some bits-o’-weird throughout the game. There is a quest in the middle of the starting city which as you chasing after a lost cat collar so that the cat that lives at the inn can impress the mayor’s cat – did I mention there is a skill called Pet Pal that lets you talk to animals?

Little bits of odd are scattered throughout the game, and can often make for an unexpected laugh when they show up. No more spoilers here, though – they are more funny when they show up out of the blue.

Bundled with the game, Larian has included “The Divinity Engine”, a powerful editor that allows users to create their own games with the D:OS engine. I’ve only barely looked around in the editor, but it appears to be jam-packed with features, so it is likely we will begin seeing fan-created campaigns down the road. Having this functionality built into the game also leaves open the door to future official campaigns as well.

Divinity:Original Sin is a great game, but that doesn’t mean there aren’t a few things I would love to see changed. For starters, a pause button in single-player would be nice – or at least an option to have all of your characters STOP MOVING when one of them shouts  out that they see a trap.

The in-combat controls are generally good, but I would like the option to not automatically end my turn just because I ran out of action points. The way the game is set up, you can press the space bar to end your turn and save any remaining action points for the next round. This is great, because some of the more powerful spells require more AP than you generate in a single round to cast.

Unfortunately, it is too easy to not realize you have used your last action point and hit space bar during the delay when the game automatically ends your turn and switches to the next character, causing them to end their turn. Not game breaking (just have to pay more attention) but an annoyance that could be fixed with a simple toggle option.

There are a few minor camera issues as well, though it doesn’t come up too often. In some outdoor areas the tree canopy doesn’t fade out properly so you end up looking down at a thick tangle of weeds unless you zoom way in, which makes getting an overview of the battlefield difficult at times. Again, though, this doesn’t happen all that often.

None of these are game-breaking, and in fact are annoyances at most. Overall, the game has been very enjoyable.