I have played pretty much all of the major MMORPG releases, if not at retail then at least in betas. While not the first MMO I had played, EverQuest was certainly the one that is the most memorable for me. 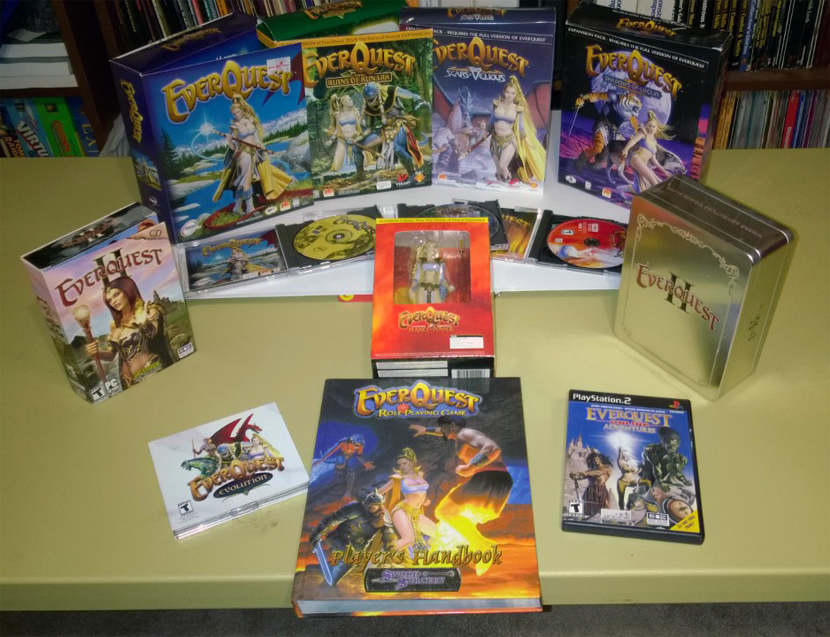 Some of my old EverQuest stuff – Yes, even EQ Online Adventures

I started on release day (March 16, 1999) with a group of local friends that had all decided to buy the game based on the excitement one of our number expressed while participating in the beta, and had soon formed a guild that became one of the top dozen guilds game-wide in the pre-World of Warcraft days.

In the 15 plus years since its release, the original EverQuest has seen 20 expansions. As a guild, we retired around the time of the Dragons of Norrath expansion (Early 2005) and moved on to other things. Some of us played EverQuest 2 (released in November 2004) for a while as well, which probably contributed to retirements from the original EverQuest.

Last month (April 2014) Sony Online Entertainment changed up their All-Access subscription, dropping the price and adding EverQuest, EverQuest 2, PlanetSide 2, DC Universe Online, and Dragon’s Prophet to a single subscription. Also included when they are released will be Landmark and EverQuest Next.

At some point over the years, Sony had converted their games to a free-to-play model, introducing an in-game store selling items and features for real-world cash. I had popped back into both EQ and EQ2 a couple of times over the last decade to see how things looked, and with the revamp of the All Access pass, I decided to reactivate my subscription and take the old games for a spin.

My druid was still there waiting for me, so I browsed through my collection of old (OLD) screenshots to find a place I could visit for a comparison. Here are the windmills in Steamfont, in 1999 and now in 2014: 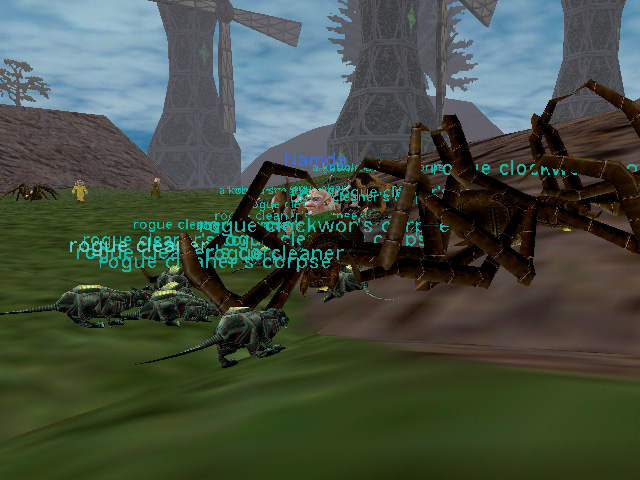 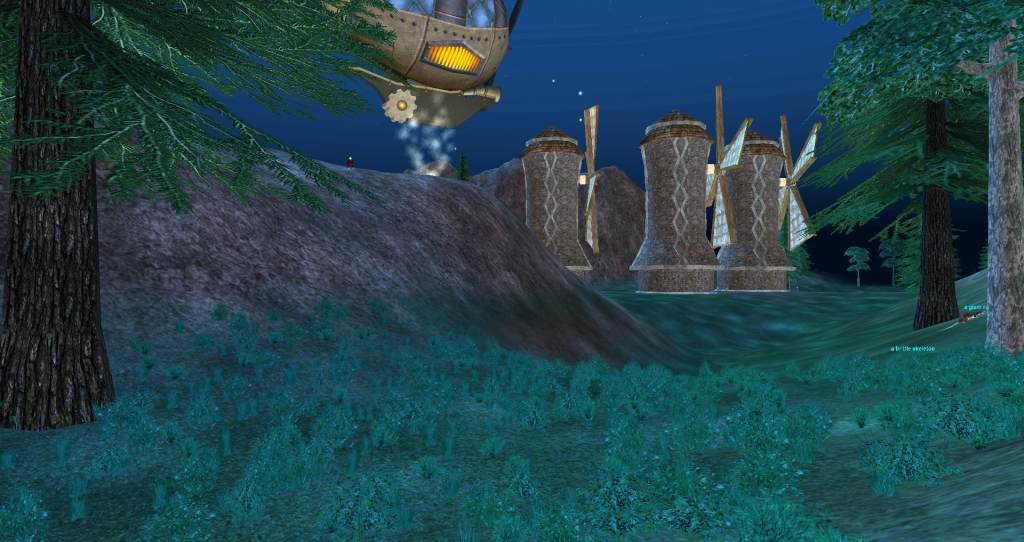 Quite a difference a much larger resolution, new textures and 15 years of updates makes. There is even a zeppelin in the zone now! My character more or less works like I remember, though it is sad to run around in full Plane of Time gear and know that it is probably not really that good compared to what people are pulling off of yard trash in today’s highest end zones. 🙂

My wife (also a day-one EQ player) also fired up her account and we created newbies to try out the new leveling experience. Today’s EQ players get a tutorial dungeon and a whole new area of Antonica where they are guided from quest hub to quest hub as they progress through the game. You can hire a mercenary – tank, dps, or heals – to accompany you on your adventures, setting up an always-available group of two. There is even a recipe book for crafting – no more putting random items into a container, hitting combine, and hoping they make something – otherwise they just disappeared.

So far our newbie characters are in the mid-30s levels (I know you can now spend Station Cash to jump straight to level 85 or something like that, but since we aren’t playing for the end-game these days that isn’t really that appealing.) For old times sake, I tracked down the Ancient Cyclops in the Ocean of Tears and we both got our newbies Journeyman Boots from Hasten Bootstrutter – so the old quests DO work just like they used to. 🙂

One thing that was interesting travelling around the old Antonica, Faydwer, and Odus zones was how deserted they are. It seems like players returning to the game (or new to it with the advent of the All Access pass) are sticking with the new leveling experience. We had Unrest to ourselves, auto-pulling beetles and all (yep, pathing in the house is still the crazy train-maker it always was!) It was also fun touring our old stomping grounds like trainer hill in Crushbone, Mistmoore Castle, and South Karana – hey, I played a druid – what can I say.

I still feel that none of the later MMOs have matched the freedom afforded the player in the original EverQuest. This is true from both a technology and a game-play standpoint. The EverQuest engine seemed like it was adapted from the popular first person shooter (FPS) games of the day, and playing from first person felt right. I don’t know how else to describe it, but later games when tried from a first person perspective seem to have some kind of angular snapping, almost like you can turn only in 15 degree increments or something. It just feels strange playing them in first person.

EverQuest also didn’t hold your hand. I can’t count the number of times I, or someone in the guild, ended up dead because they targeted an NPC and tried to type “/hail” and missed the slash key. Hitting H was ok, but the “A” key was used to toggle auto-attack, and since NPCs were usually many, many levels higher than you, you would end up staring at your corpse wondering what happened after the bread merchant one-shotted you. Kind of made you wonder why they needed you to save their town, city, wagon, or whatever.

Post original EverQuest, MMOs started using the “encounter” concept (including EQ2) where a number of enemy MOBs are linked together. If you attack one, you will be fighting them all, no matter how carefully you plan your pulling. When playing other games, I really miss the chance to play with a good monk that could keep a steady stream of single target MOBs coming to a group. That just isn’t possible in MMOs these days, no matter how skillful your puller, and I think it essentially eliminates an entire aspect of play.

I’ve also been playing a bit of EQ2, and as remarkable as the changes in EQ1 are, the remarkable part about EQ2 is how little it seems to have changed visually. I never got to the EQ2 end game – real life came along and reduced the time I had for MMOs drastically – but the game looks pretty much exactly like I remember it. This is a testament to the quality of EQ2s graphics from the start – though many of the PCs of the day couldn’t hope to run it with a playable frame rate on the highest settings. 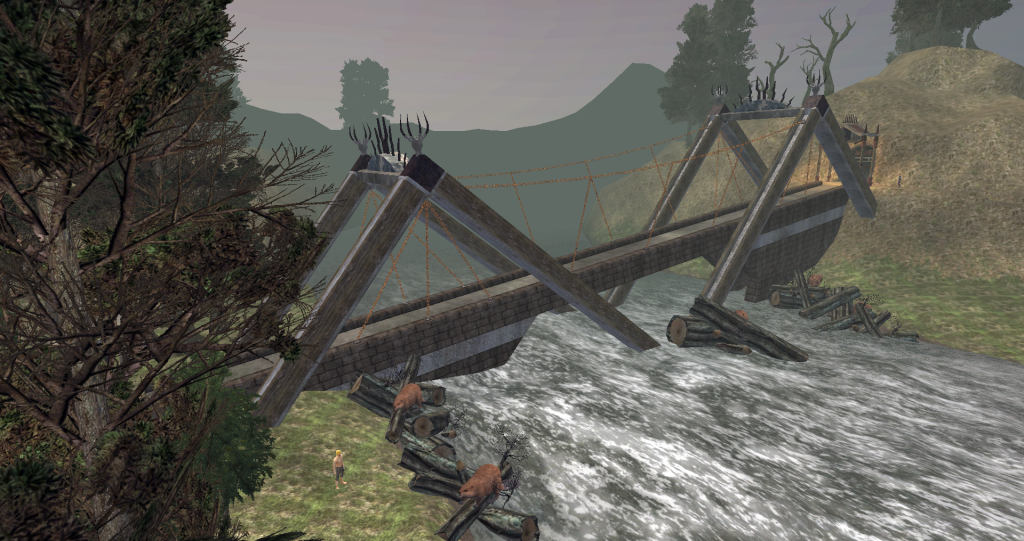 A bridge in Nektulos Forest (EverQuest 2)

Game-play wise, there are plenty of changes. I had to select new classes for most of my characters, because at some point Sony eliminated the idea of selecting a general class type (Fighter, Priest, Scout, Mage) and then selecting specific classes based on your race later on. Now you start with your final class when you create your character.

Alternate advancement has also been revamped from what I remember – though in truth I don’t remember much about it. My highest level EQ2 character was 46 when I stopped playing.

Since reactivating my account, I’ve probably spent the most time in EQ2, playing through first the Halas zone and quest series, and then moving on to Nektulos Forest (with a brief stint in the Thundering Steppes for old times sake).

There are other cool new features now too. While I haven’t had a chance to try it yet (I still need to save up some Station Cash) there is now a Dungeon Maker feature in EQ2, which uses the house decoration tools to allow players to stock their own dungeons with encounters, scenery, and treasures. These dungeons can then be played by other players and rated. This is something I can’t wait to dig into, because even as far back as the original EQ I always thought MMOs should include a “Dungeon Master” class, which allows you to create adventures playable by others. Their ratings of your dungeons would be your character’s experience points, and higher level DMs would have access to a wider variety of layouts, scenery, monsters, and treasures to place. The EQ2 Dungeon Maker doesn’t go that far, but it still sounds pretty cool.

Landmark uses the terrain and PC model engine from EverQuest Next to allow players to craft and build in a voxel-based sandbox. Think Minecraft, but with much, much more detailed control. 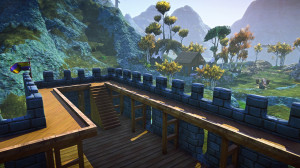 A landmark screenshot – a world built with tiny little voxels

I’ve had the opportunity to play a bit of Landmark in the beta, and while building has never really been my thing (my daughter is the Minecrafter, so she will probably really like Landmark) the detail in Landmark is impressive. Players can build pretty much anything they can imagine, and the developers have stated that they will be looking to Landmark player creations to build the world for EverQuest Next.

EverQuest Next (or EQN) looks to be revolutionary on several fronts. For one thing, given that the terrain engine is voxel based, it can be modified in game and stay that way. This isn’t the “phasing” technology built into other games where there are a couple of set stages of an area and you see whichever one is appropriate for your current progression. Imagine destroying a bridge over a river of lava and dumping the monsters that are chasing you into it. That’s the kind of cool stuff that the devs have hinted at for EQN.

Much of EQNext’s world will be procedurally generated, with dungeons appearing below the surface. Players can explore them, clear them out, destroy them, bring down the ceiling, or what have you. Eventually the area will be regenerated into something new, so you never really know what to expect.

The early information about the class system is also interesting. While there is not a lot of solid information available yet, from what I understand there will be a base selection of classes that are really collections of abilities and features. As you explore the world you can discover other classes (I believe I have heard mention of their being about 40 of them – but I could be wrong.) You can then mix and match features of the classes you know to create your own custom class, giving you the abilities you want to have.

Both Landmark and EQN will be free-to-play, with benefits  included for being an All Access subscriber (you can no longer be a single-game subscriber, though the price of the all access pass is the same or less than the individual subscriptions were before the change).

For one thing, I’m planning on keeping my All Access pass alive for the foreseeable future. It has been a blast revisiting old favorites for the last few weeks. I even managed to get myself killed in the Halls of Honor while exploring 🙂 I’m also looking forward to trying out EQN if I wind up in the beta. After 15 years, Norrath is still a fun place to play, and if EverQuest Next can deliver on what the devs have planned, it should be so for a long time to come.